Many factors govern the proper selection of a ring and pinion, whether it’s for a street machine, or a race car involved in the ultra-competitive world of drag or circle track racing.

Ring and pinion type must first be considered, particularly by drag racers. Most drag race cars – and all street and circle track cars – should use what is referred to as a “street” or standard type gear set. These gear sets, made of 8620 steel, have excellent wear characteristics and are designed for a long, trouble-free life.

“Pro” or competition gear sets are engineered specifically for drag race cars that transmit tremendous amounts of horsepower and torque from the engine to the drive wheels. “Pro” gear sets are made of a much “softer” 9310 high-impact steel which is not nearly as brittle as conventional street gears and therefore, not as prone to breaking off teeth (see photo).

A “Pro” series gear set is generally recommended on any car that produces in excess of 800 horsepower, according to drive train manufacturer Mark Williams Enterprises. While on the topic of race car drivelines, weight is another important factor. Particularly heavy race cars are extremely hard on the driveline components including torque converters, transmissions, driveshafts, and differentials. Combine high power and a heavy weight – such as the popular NMCA “Shootout” type cars – and it’s the ultimate test of a ring and pinion.

These 3,000+ pound, mega-horsepower cars should ideally use the softer pro gear sets. Of course, these sets are NOT intended for everyday street use as they do not have the extended life characteristics common to harder gear sets. According to the folks at MWE, a pro gear set’s life span can be extended somewhat by occasionally checking and readjusting the back lash. Pro gears may be the “way to go” if street gears are currently suffering recurring failures. 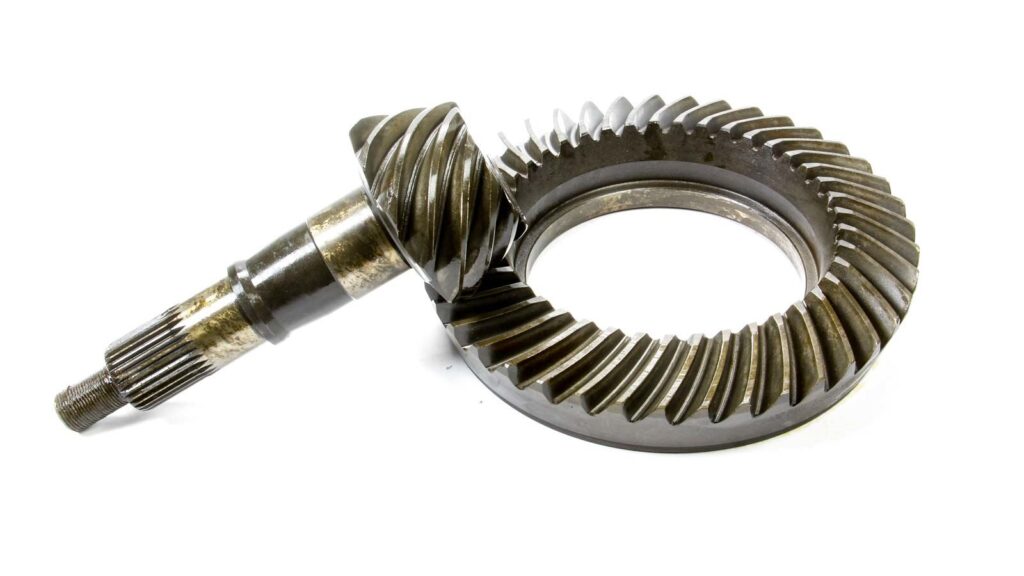 Proper ratio selection can make the difference between being a top runner and an “also-ran”. An engine in a car that is under-geared (too low a ratio, numerically) can’t make the horsepower necessary to be competitive because it can’t rev high enough.

An under-geared circle track car, for example, will be particularly weak coming out of the corner, and an under-geared drag car will suffer from poor 60 ft. times. A car that is over-geared (too high a ratio, numerically) will run “out-of-breath” on the straightaways or past the 1000 ft. mark of the drag strip, because the engine revs far past its horsepower peak. (NOTE: To avoid confusion, remember that a numerically low gear – 2.75:1 – is actually a “high” gear ratio, and, conversely, a numerically high gear – 5.88:1 – is considered a “low” gear ratio). Now, with playback and memory tachometers, proper gear ratio selection is much easier because performance during a run or a lap can be closely scrutinized by race teams.

THE ROLE OF RPM RANGE IN GEAR RATIOS

This is particularly important to drag racers whose engines spend most of their time accelerating. A drag engine revs when the car is launched and experiences a change in load until the moment the transmission is shifted into second gear where, due to the higher (numerically lower) second gear ratio, the engine must again accelerate. The same holds true for the next gear change(s).

Circle track engines don’t spend quite as much time under constant acceleration, but depending upon the track, may be off the throttle going into the corner and back on coming out of the corner. A power speed calculator such as the one sold by Moroso (#MOR89650) can be a valuable aid during the gear selection process. The Moroso calculator is a simple slide rule which can be used to display engine RPM at specific MPH after the gear ratio has been factored in.

Gear ratio selection for a performance street machine or street rod is also important. The main considerations should be driveability, performance, and fuel economy. A car will perform much better with a 3.73 ratio than it will with the stock 2.56. However, fuel mileage will suffer because the engine will be running at a higher RPM than it did with the 2.56. A 4.10 or 4.56 ratio-equipped car may drive super in town, but can be just plain miserable to drive on the highway.